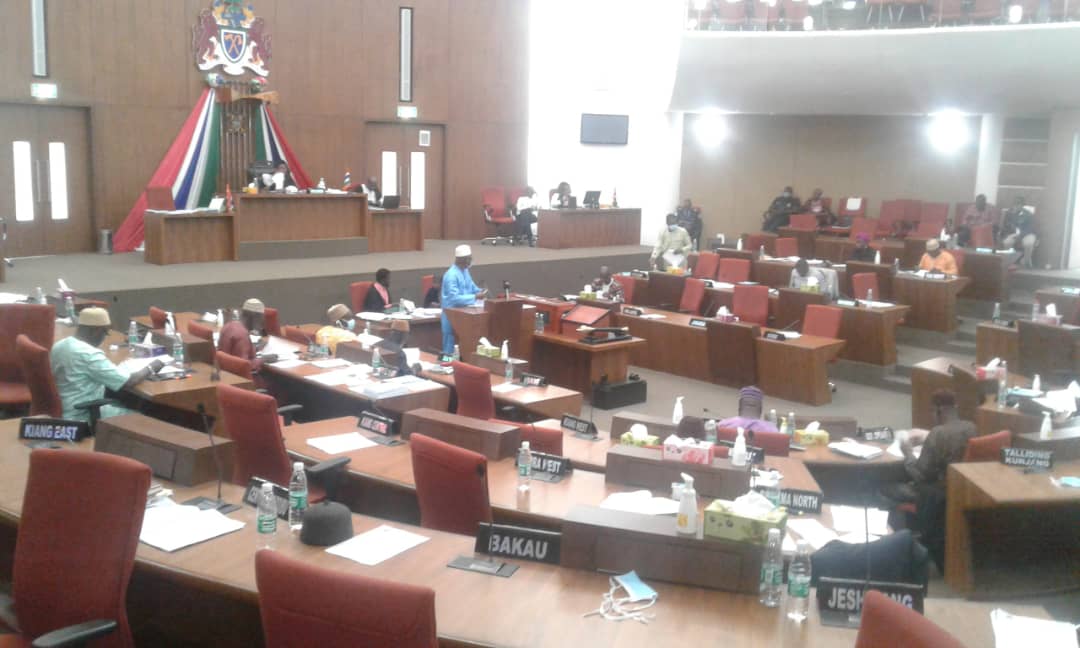 The Honourable Minister, Mamburry Njie was, on Wednesday 8th July, 2020 called at the National Assembly to give answers to questions raised by Parliamentarians on issues of finance and state of affairs of the Gambia’s economy. Honourable Njie was poised to clear their doubts on the finances received and spent by the government as well as other regulations that his Ministry is overseeing.

To begin with, the Honourable Member for Bakau required the Honourable Minister of Finance to tell the august Assembly about the Government’s preparedness, and position for the much talked about West Africa single monetary currency dubbed “the Eco”. In his response, Honourable Njie voiced out that the Government of the Gambia is still committed to ECOWAS single currency and as part of the set macroeconomic convergence criteria; “the Gambia continues to meet three of the four primary convergences and one of the two secondary convergences since 2017”, he told deputies. However, he pointed out to them that The Gambia is missing the Budget deficit and debt to GDP ratio; yet this has placed the Gambia among the best performing countries towards the regional integration process of the single currency.

In response to the Member for Upper Fulladu West on the level of budget execution of all Ministries, Departments and Agencies (MADs) from January – September 2019 and the compliance level as per the approved budget allocations of 2019, the Honourable Minister told National Assembly Members (NAMs) that as at end September 2019, there was an overall budget execution rate of 61 percent. A detail of this can be found in the table below:

When the Member for Upper Fulladu West further asked why duty charges worth of D13 million were levied on KMC garbage disposal trucks that was in the direct interest of the general public, Honourable Njie emphasised that the provision of the KMC garbage trucks was a Public Private Partnership arrangement between KMC and ESPACE motors and a review of the agreement indicated that the trucks were the property of ESPACE motors until such a time KMC completes payment (36 months) and as such, duty exemption could not be granted under such a scheme.

Concerned with the evolution of the Digital Economy in many countries and its significant contributions to a country’s GDP, as well as its potential for use in terrorist financing and money laundering, the Honourable Member for Upper Saloum sought the Honourable Minister to clarify whether the Central Bank of The Gambia has policies and regulations in place for the monitoring of the digital Economy especially mobile money and consumer protection. In his statement, Honourable Njie brought to his notice that the government does recognize the risks associated with digital economy, and it is in this light that the government had set up the Finance Intelligence Unit (FIU) and The Gambia Consumer, Competition and Protection Commission (GCCPC) to monitor any threats arising from such acts. And regarding mobile money, “the Banking Supervision Department of the Central Bank of the Gambia is closely monitoring operators to ensure risks emanating from such are contained” he added.

The Member for Niamina East quoted that the approved budget for the National Youth Services Scheme (NYSS) is 15,000,000.00, and 50% of the sum was released as personnel emoluments for staff. To know the budget balance, the Honourable member sought clarification from the Finance Minister, who reported that the approved estimates for NYSS as at 31st December 2019 stood at D11, 103,460.00 as opposed to the initial approved estimates of D15, 232,129.00 which he indicated are as a result of virement to meet budget shortfalls. “In this regard, the sum of D11,103, 460.00 has been released and spent as at 31st December 2019 which represent 100% absorption rate for NYSS budget, thereby having zero budget balance” he asserted

When required to bring to table the total sum of money acquired from the sale of The Gambia diplomatic passports since the new government assumed office by the Member for Niamina East, Honourable Njie humbly requested him to kindly redirect this question to the Ministry responsible for issuing of Diplomatic passports which is in a better position to give clear answers.

To curb the far reaching inflationary ramifications the simultaneous circulation of new and old banknotes in the market could cause, the Wuli East Member had urged the Honourable Minister to reveal to deputies what steps his Ministry has taken to address the issue with a view to end the practice. In his response, the honourable Minister told the august gathering that the Central Bank of the Gambia has a ‘co-circulation policy’ but was quick to note that the CBG has issued a circular to all commercial banks to return old notes (soiled notes) as there is adequate stock of new notes for circulation.

“Why are Gambians forced to have vehicle insurance and yet failed to be compensated when eventualities happen?” The member for Kiang East demanded answers. “Vehicle insurance is mandatory as per insurance laws of The Gambia, and as such all vehicle owners are required to insure their vehicles. With respect to refund or compensation, the same law guarantees compensation where appropriate and victims are responsible to pursue insurance companies to ensure compensations are made”. The Honourable Minister responded.

Regarding the two aircrafts grounded at the Banjul International Airport for almost 3 years now, the Minister told Deputies that the two air planes have already been sold at the tune of US$240,000.00 in May 2018.

“The Public Utilities Regulatory Authority (PURA), had issued a notice that effective 10th June 2019, the government of The Gambia would introduce new levy for sport development on the Telecommunications and the levy will be charged as follows:

Further speaking, he was interested to know the total amount raised since the introduction of the levy and whether the fund generated from the levy will be judiciously utilized for the development of sports. Honourable Njie informed that since the introduction of the new sport levy, a total of D43.6 million has been collected and transferred to the Ministry of Youth and Sport.

On the issues of companies having Public Private Partnership (PPP) agreements with the government of the Gambia, signatories to these agreements and the legal framework the Directorate relies on to promote PPP in the country, Minister Njie responded that the legal frameworks used by the Directorate of Public Private Partnerships in promoting PPPs in The Gambia are as follow:

Companies that have PPP Agreements with The Government

Finally, on the last presidential tour, the Honourable minister told deputies that a total of D4, 791,105 was spent. In a similar query on the implementation of the vehicle policy, Hon Njie informed Parliamentarians that the government vehicle policy is currently at the Ministry of Works, Transport and Infrastructure for review and once a clean draft is available it will be shared with stakeholders. The Session concluded.