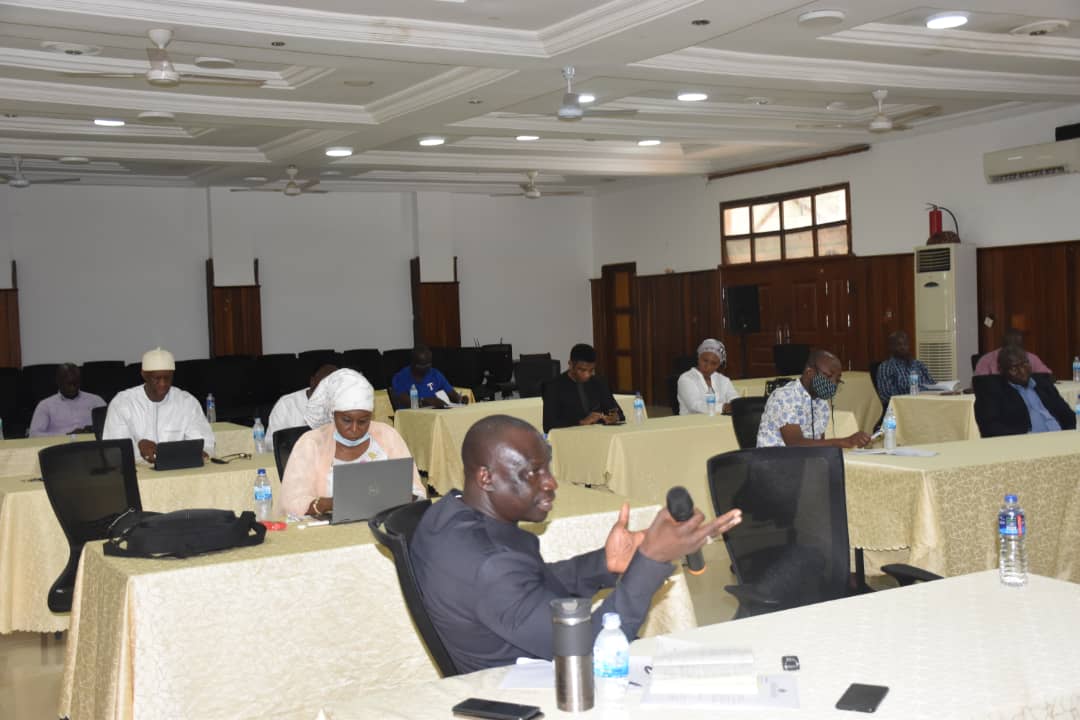 On the 4th July, 2020, the Minister of Finance and Economic Affairs invited stakeholders from the banking sector, Gambia Revenue Authority and the Ministry of Trade at the Penchami Hall, Paradise Suites Hotel to discuss challenges facing the banking industry and its implications on the Gambia’s economy. The discussion also centred on creating post Covid-19 strategies and the introduction of new fiscal technologies to boost the country’s economy.

The meeting was attended by representatives of the Bankers’ Association, Managing directors of Banks or their representatives, the Governor of Central Bank and his team, the Commissioner General of Gambia Revenue Authority, the Minister of Trade, and finally the hosts: The Minister of Finance, Permanent Secretaries 1&2 and the Deputy Permanent Secretary Fiscal Affairs.

In his opening remarks, the Honourable Minister, Mamburry Njie called on participants to open up and voice out issues affecting their institutions and operational procedures and suggest possible solutions to their shortfalls. He referred to the gathering as a family and that no institution should try to hide their pitfalls. He reiterated that the Ministry of Finance was there to listen to what they had to say regarding challenges facing them and to render support where possible and necessary, particularly in this era of Covid-19 Pandemic. He highlighted that his Ministry will do everything possible to provide the conducive environment for private sector operators to operate freely without hindrances. Taking note of the constraints faced by every sector of the economy, he believes that when there is interaction, brainstorming and ideas exchanged, positive solutions can be arrived at to tackle any problem faced with.

Speaking further, Minister Njie expressed concerns over the slow development of tourism and agriculture in The Gambia, noting that a lot needs to be done to boost these sectors, citing some of the challenges facing the overall economy. On a final note of his opening remarks, Honourable Njie welcome the Commissioner General of GRA and the CBG governor for being available to shed more light on issues regarding their relationships with the Commercial banks.

Bakary Jammeh, the Governor of Central Bank acknowledged that liquidity is abundant as well as credit. He expressed delight in the growth and stability of credit to around seven billion especially in May, a time credit was expected to fall drastically. This, he said is the collective effort and commitment of the banking industry as they continue to do financial intermediation in the economy. He urged them to keep up the good work and continue to help the private sector because refunds and recovery are principally going to be in their hands. He further informed bankers of his commitment to render them support as they keep helping the private sector. He cited that for the first time, credit to construction in May, which has risen to about D1.8 billion is higher than credit to distributive trade. This according to him is because banks were lending money to the private sector even during the pandemic. He attributed this possibility to the presence of strong financial footing by banks when the pandemic broke out. He posited that this pandemic differs from the 2008 financial crisis because it found commercial banks in many countries on sound financial stability. He appealed to banks to continue lending to the private sector in order to encourage quick recovery, but to take appropriate levels of risk management hence the CBG’s role is to protect depositors’ funds, so that when there is a recession they can quickly recover. However, Mr Jammeh’s worry is the increase in corporate debts even before the pandemic and the corresponding rise in sovereign debts which according to him, is because governments have to take a stance to support their people in the fight against the pandemic. In doing so, they have to borrow a lot of money to do that.

The permanent Secretary 1, Ministry of Finance and Economic Affairs, Buah Saidy highlighted the profit generating areas of commercial banks to be interest from distributive trade, foreign exchange and treasury banks. In order to improve financial integration, Mr Saidy urged the government to create an enabling environment for commercial banks to venture into giving out loans to the investment sector in infrastructure, agriculture and so on to help develop this country. He acknowledged the challenges banks would be facing in terms of loan recovery when they venture into heavy loan schemes such as mortgaging and infrastructure financing. He further noted that these are areas that banks can venture into but the level of risks involved is scaring them. He cited this meeting as the right forum to discuss these issues for consideration. He urged banks to come in and do the investment because infrastructural development in this country is mainly financed from foreign loans and grants. He claimed that these are areas where commercial banks can come in, invest and generate a lot of profit.

Additionally, the PS encouraged banks to provide mortgage loans to people, noting that some people in government work until retirement but cannot afford to buy a single house of their own. In comparison, PS alluded that in other countries, especially in the West, people are given houses to pay for on mortgages by banks as soon as they start working. This provides them the opportunity to get their own houses before retirement. He further encouraged banks to begin doing the same thing and urged them to discuss the challenges hindering them from venturing into these areas. On a similar issue, Mr Saidy reminded the forum that banks' investment in the productive sector is very low, so his worry is, how can the environment be created for/by banks to invest into this sector? He challenged banks’ representatives to point out the obstacles to this venture. He went on to shed more light on the difficulties the Covid-19 pandemic has created for governments and private sector operators in the world. He added that the pandemic has caused problems for lives and livelihood. Therefore, governments’ responsibility is to cater for the life part of it which justified the D500 million disbursement the government of The Gambia created to provide food support to its citizens to save lives. For the part of livelihood, he urged banks to support businesses that are stricken by the pandemic to ensure that all pillars of the economy work together towards a speedy recovery of the economy. He pointed out that the Gambia Revenue Authority has also provided some relief to the private sector including banks on tax deferral without penalty if there are difficulties in paying their taxes.

Yankuba Darboe, the Commissioner General of GRA had acknowledged that banks have always been compliant in tax payment. This, he expressed satisfaction and urged them to always come forward to discuss their issues of concern with his office. He revealed that the GRA wants to digitalise their systems that’s why they have been signing MoUs with many commercial banks. He said, this has made 80 to 90% of the revenue they collect go through the Commercial Banks and then to the Central Bank making work easy for them in the sense that the likelihood of missing money is no longer there.

On their part, banks’ representatives expressed appreciation of the support the government has been providing them through the Ministry of Finance and the institutions under its purview. However, some of them expressed some challenges they are facing and urged the government to step-up to their aid to have them resolved.

Finally, the Honourable minister proposed to have such a forum conducted every four weeks to ensure that challenges facing the private sector including commercial banks are rightfully addressed.