Fifty-Fifth (55th) Annual Virtual Meeting Of The Governors Of The African Development Bank, 2020 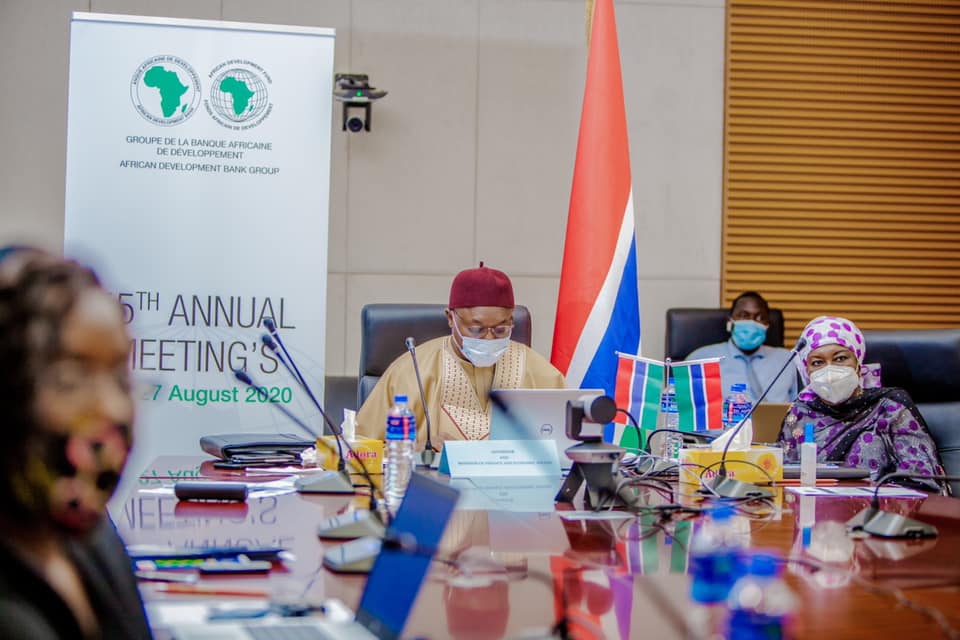 The Governors, representing Member Countries of the African Development Bank and State Participants of the African Development Fund (the “Bank Group”), convened virtually for the 2020 Annual Meetings from 26th to 27th August 2020 chaired by Her Excellency Mme Niale Kaba, Minister of Planning and Development for Côte d’Ivoire and Chairperson of the Boards of Governors. Prior to these meetings, Hon. Mambury Njie, Minister of Finance and Economic Affairs and the Governor for The Gambia,

In his opening Statement, the Chairperson welcomed the members of the Standing Committee and recalled the main objective of the meeting which was the inflation-based annual review of the remuneration of the President and Executive Directors of the African Development Bank and to arrive at the Committee's recommendations to the Board of Governors during the Bank's  Annual Meetings scheduled for 26-27 August 2020.

In attendance was the Secretary General of the African Development Bank, who in a statement thanked the members of the Standing Committee for attending the meeting at this time and in a virtual format. He recalled that the meeting was initially scheduled to hold on the sidelines of the Spring Meetings of the International Monetary Fund and of the World Bank in April 2020, but had to be postponed due the Covid19 Pandemic.

Having concluded the meeting, the Standing Committee unanimously designated the Chairperson of the Committee as rapporteur to present its report and recommendations to the Board of Governors at the first sitting of the 2020 Annual Meetings, which is on the 26th August.

The mechanism for the annual review of the President and Executive Directors took into account the financial situation of the Bank during the period under review and the inflation during the previous year (January 1, 2019 to the end of December 2019). Thus, the inflation rate was calculated as a weighted average of consumer price increases at the duty station Abidjan, Côte d’Ivoire (40% for the FCFA), in Europe (30% for the Euro) and the United States of America (30% for the USD).

The Secretariat reported that, as calculated by the Statistics Department of the Bank, this resulted in a rate of inflation of 1.4% and that the note prepared by the Finance Complex of the Bank confirmed that the proposed increases could be accommodated without jeopardizing the financial situation of the Bank.

In consideration of the working documents: 2020 Annual Review of the Remuneration of the President and Executive Directors of the African Development Bank, the Chairperson of the Committee, Hon. Njie thanked the General Secretariat for the presentation and opened the floor for discussions.

In their part, committee members sought clarifications, particularly on the inflation rate in Côte d'Ivoire, the specificities and modalities of the annual and comprehensive reviews of the conditions of service of elected officers of the Bank, the financial situation of the Bank and experiences in similar international financial institutions.

Following the clarifications provided by the Secretariat, the Committee acknowledged the validity of the methodology and the relevance of the conclusions of the review and agreed that they were in accordance with Resolution B/BG/2002/12 and B/BG/2002/13 of the Boards of Governors that authorized a yearly inflation-based adjustment to the salary of elected officers. However, the Committee unanimously observed and agreed that given the exceptional circumstances and the economic difficulties created by the COVID-19 pandemic, it would not recommend any inflation-based adjustment to the salary of the President and of Executive Directors of the Bank to the Boards for Governors for the year 2020.

In his closing remarks, the Chairperson, Hon. Mambury Njie thanked the members of the Committee for their active participation and fruitful deliberations.

In a separate meeting on the 25th August, the Honourable Minister of Finance and Economic Affairs, Mambury Njie, who was still taking treatment for Covid-19 also chaired the virtual annual constituency meeting of the African Development Bank with Constituency Governors from Ghana, Liberia, Sierra Leone and Sudan. The meeting was meant to be held during the sideline of the Virtual Annual General Meetings of the Boards of Governors of the Bank Group in Abidjan, Cộte d’Ivoire. Among other things, the agenda was to review the minutes of the 2019 Constituency Meeting and to discuss the Constituency Annual Report of 2019.

As discussed in the meeting, the report covered the period from January - December 2019, during which the African Development Bank Group undertook a series of activities, particularly, those that impacted the Constituency member countries towards fostering its goal of developing Africa.

The issue of late payments for the various General Capital Increase’s (GCI) subscriptions and arrears owed by some of the Constituency Member Countries as well as failure to pay for reallocated Shares for all Constituency member countries were addressed since they have been a matter of great concern to the AFDB office. The Governors also put emphasis on comments in the report that urges constituency member countries to remain relevant and perhaps move a step higher than their current penultimate position on voting rights. The appeal to Honourable Governors to give serious consideration and attention to ensure timely payments for GCI’s subscriptions as well as allocated Shares was stressed.

In sequel to the Standing Committee and Constituency meetings of 19th and 25th August, 2020 respectively, The Gambia’s delegation, headed by Hon. Mambury Njie virtually participated via zoom link on the 26th and 27th annual meetings of the bank. In the first sitting of the meeting, Hon. Njie presented his statement on the meeting of the Standing Committee followed by deliberations from governors of other countries.

On the final day of the meeting, governors took part in the E-voting system and re-elected Dr. Akinwuma A. Adesina as the continuing president of the AFDB in the next five years. The meeting was closed after a splash of congratulatory messages from governors and participants.

Ministry of Finance and Economic Affairs